Road To Recovery Blog: Hong Kong, “We’re All In This Together”

Hong Kong has been making headlines since June 2019 when anti-government protests erupted and continued throughout the year which had the whole world watching. And as if that crisis wasn’t enough the news of a Coronavirus sweeping across Mainland China shifted the city’s focus to preparing to fight yet another outbreak of a respiratory illness that looked familiar to an experience Hong Kong had had in the not too distant past. 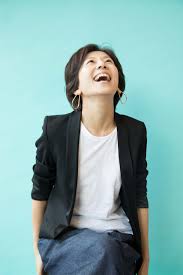 We spoke with Elaine Tsung, the founder and CEO of Garage Society in Hong Kong, who gave us a touching insight into how Hong Kong knows how to pull together in times of hardship, and why its citizens know that their cumulative actions are the reason they have been so successful in containing the virus.

Elaine explained to us that everything got very real for them in late January when Chinese New Year brought many travelers from Mainland China into Hong Kong. Once the outbreak began, the entire city jumped into gear using all their knowledge from the previous SARS outbreak that hit Hong Kong in 2003, which put them in a very advantageous position when it came to containing the outbreak of COVID-19. Citizens were quick to implement the necessary measures, which consist of door mats with bleach for cleaning the bottom of your shoes, temperature checks, and wearing masks (everyone, not just a few) even before cases had been reported in Hong Kong; it was enough to see what was happening in Wuhan to get procedures set in motion.

Cleaning common areas and surfaces every 2 hours has become part of their routine, which is done dutifully due to its effectiveness in stopping the spread within the workplace. This is something that was adapted naturally after the SARS outbreak, processes that would seem excessive in any other part of the world.

According to the outside world seemingly every city in Mainland China was on lockdown, where extreme measures were taken to keep people home and away from each other to stop the spread, however though Hong Kong was cut off from the rest of China and international travelers, they were free to go about their routine with the exception of wearing masks and increasing safety measures. 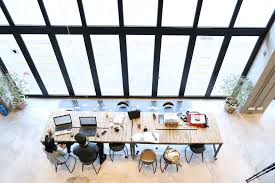 When we spoke about how Garage Society was managing having their space open, Elaine explained that people were encouraged to take part in rotational schedules, so that crowding was being avoided within the workspace; the idea that some days people work from home and others they come into the coworking space. However, if you do decide to go out in public wearing a mask is an absolute must and all of these initiatives are voluntarily upheld by citizens and private sectors without it being government mandated.

Elaine was firm about how effective masks are when they are worn collectively, and though there is much to be learned about the virus, it is quite clear that it can be spread through droplet transmission, which can be curved when both infected and non-infected people wear masks.

When we spoke about how extreme the efforts were, Elaine explained that overreacting will always put you in a better position than if you don’t react at all.

“It’s most important for a very crowded and congested city like Hong Kong, that we know to do it collectively. Like if I wear masks, and if you don’t have it, I’ll give it to you. And if all of us wear it, all of us actually make sure that we stay clean and hygienic. Then hopefully we do our best in trying to survive this pandemic.”

“I think workers are starting to see the shift. And if you were a smart person [employee], if there were two companies, one cares about you, one cares about their money, which one will you work for? And eventually, I really hope that smarter companies will know to adapt faster, and the companies who are still in the kind of the, I call it the “data mindset”, so looking only at the P&L [Profit and Loss] are the companies which are going to get themselves into more trouble. Because at the end of the day, businesses are built by people. Businesses are not built on Excel. So you need to really look at what is the most valuable asset of the company, the assets are the people, if you’ve got the brains, you’ve got the people, and your business will go a long way. So if you’re not taking good care of your people, you won’t have a business in the long term.”

There is no doubt that Elaine knows what she is talking about when it comes to business with Garage Society having expanded into 5 countries with no immediate end in sight, so her advice to take care of your people should absolutely be considered.

And just to show you a little more of her character and the kind of person she is, after telling her that I had very few masks at home and that there was a shortage in Europe and I was unable to get more in Berlin, this was the email I received after our discussion: 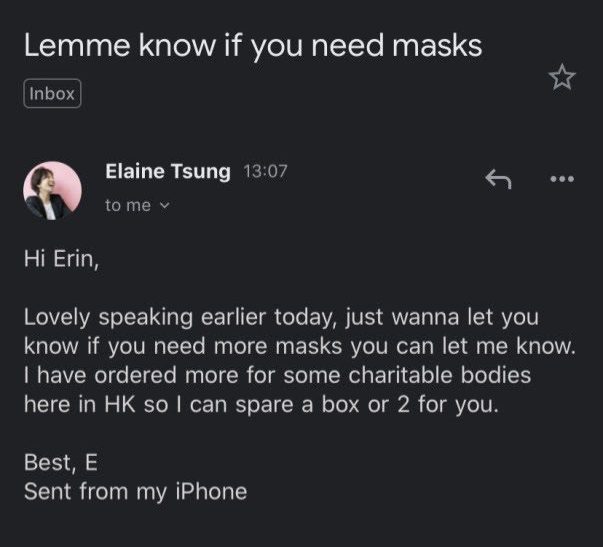 What an inspiring discussion, and a great reminder as to why we are in the coworking industry in the first place.

Coworking Road to Recovery Working From Home
Road To Recovery Blog: Hong Kong, “We’re All In This Together”2020-04-162020-04-21https://upflex.com/wp-content/uploads/2018/04/logo_upflex.svgUPFLEXhttps://upflex.co/wp-content/uploads/2020/04/ryoji-iwata-n31jplu8_pw-unsplash-1.jpg200px200px
About
Erin Westover
Erin is the Head of Partnership at Upflex. She is a new work advocate with a passion for inspirational and thoughtfully designed workspaces. She loves being active and all things nature, though she finds herself perpetually living in cities. She currently lives in Berlin Germany.
Related Posts
Recent Posts