How Upflex Saved my Commute from Hell

By Kate Walquist
January 21, 2019
On an overcast November morning, I started my daily 10-minute walk to the subway. Like many Brooklynites, I have a 45-minute or so commute into my office in Manhattan, between the walk and the train ride. But as I saw the looming crowd on the subway platform, I knew something was wrong.
When you’re a New Yorker, you know the difference between a typical crowd on the platform and a crowd when something is wrong. That morning, it was clear something had happened. Maybe there were signal problems, or an accident, or a subway train had broken down — all common enough occurrences, but ones that could take hours to recover from and get back to normal. Especially during the morning commute.
30 minutes went by, still no train to be found. A crackling voice on the loudspeaker mangled out that there’d be no more trains coming my way. No real explanation; just a vague hopeless message of despair that we were stranded. I was out of luck. Then only solution offered was a bus ride to the next major transfer station, which is laughable in the middle of rush hour.

What’s Wrong with the Trains?!

It’s classic MTA – unreliable service which hit an all-time low in 2018 with only 58% of weekday trains being on time. Usually we’re left without an explanation on the real issue, then there’s a post-apocalyptic mad-dash to one already-crowded train an hour later. It’s so underfunded and leaves tons of workers feeling frustrated on their commute (like me).
At this point, I knew I was in big trouble. I can usually make it to work in 45 minutes on the subway. But the bus is a completely unrealistic alternative — and I usually don’t mind the bus, but only when I’m not in a rush. They take nearly twice as long to go the same amount of distance, which means that when it’s the only way for me to get from Brooklyn into Manhattan for work, it’s not even worth going in. By now, I was going to tack on another 90 minutes by taking an alternate route. I’d have to handle a long bus ride to a new station, switch subway lines in the middle of morning commute chaos, and somehow get my day started at the office. Not ideal. I felt a bit desperate stuck in the swarm of people. While we all frantically tried to get to our places of work, I wanted to throw in the towel and get back in bed.

A Simple Solution to Commuter Woes

But then I remembered my Upflex app. I pulled out my phone to see if there was some nearby availability. I could work from a local coworking space until lunch with ease. Then, when the train sorted itself out and the commuter traffic would die down, I’d try again.
As luck (finally!) would have it, there was space available a block from the station I needed to get to my office. So I sprinted back home, grabbed my laptop and headed to my temporary office for the morning. Within minutes, I had my cozy and quiet station set-up. 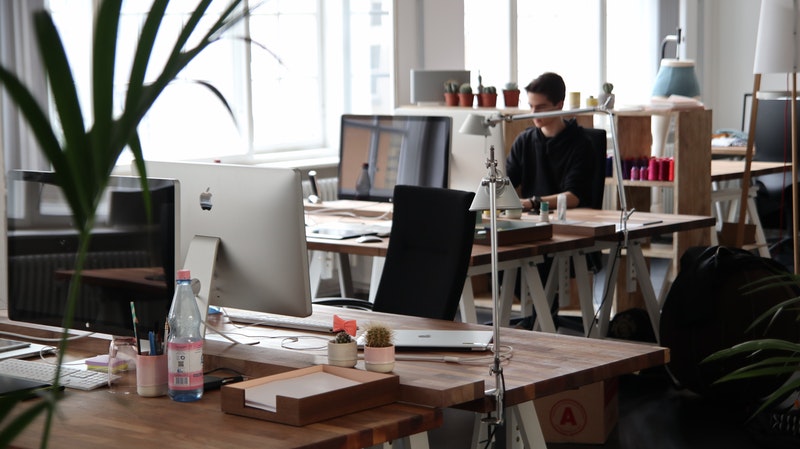 This space was beautiful — tons of natural light, plants, and large natural-wood desks. I loved the ample private offices for those who needed serious concentration, and the friendly barista who made a mean macchiato. I didn’t lose much time at all and was able to stay on top of my workload, phone calls and remote meetings with no issues.
About three hours later, I felt confident that the trains were running again and headed to the office. It took my normal commute time and I lost very little productivity. In fact, I accomplished more in a fresh work environment with my uninterrupted flow. I did get to my office in the afternoon with no problem, but I would have enjoyed staying at the coworking space and finishing all my daily tasks.
I can’t tell you what a relief I felt knowing there was another option besides sweating on the subway all morning.  I wasn’t going to lose any of my workday, and thanks to Upflex, I didn’t.
Life happens. Upflex made sure I didn’t lose my stride.
Coworking Productivity Workplace flexibility
How Upflex Saved my Commute from Hell2019-01-212019-01-24https://upflex.com/wp-content/uploads/2018/04/logo_upflex.svgUPFLEXhttps://upflex.co/wp-content/uploads/2019/01/eddi-aguirre-569986-unsplash.jpg200px200px
About
Kate Walquist
Kate is the Product & Marketing Manager at Upflex. She loves content and simple but beautiful designs. In her spare time, she tries to beat her best time at the New York Times crossword.
Related Posts
Recent Posts